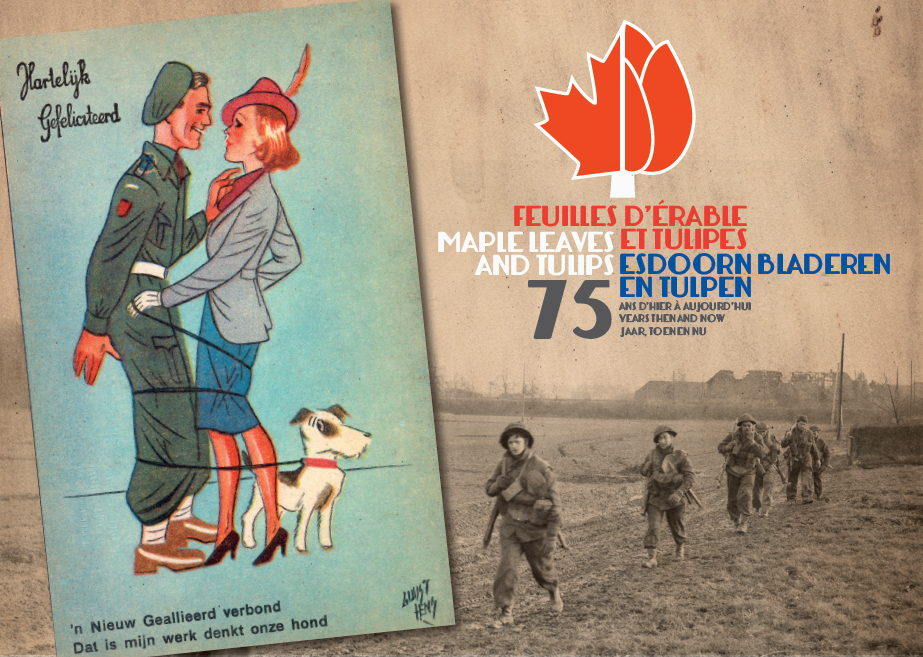 SCROLL DOWN FOR ONLINE EXPOSITION!

In honour of the 75th anniversary of Victory in Europe the Juno Beach Centre presents the temporary exhibit “Maple Leaves and Tulips: 75 Years, Then & Now”.

This exhibition, developed and presented by the Juno Beach Centre in partnership with the Liberation Route Europe Foundation, commemorates the 75th Anniversary of Victory in Europe to highlight the major role played by Canadians during the Liberation of the Netherlands in the final nine months of the Second World War. Historical moments are evoked in order to illustrate the strong ties that united the two countries during the terrible winter of 1945.

The post war era is also featured, from the many Dutch war brides who followed their Canadian soldier home to a new country, to the first large waves of Dutch immigration to Canada, as well as the many commemorative traditions of the more recent decades.

This exhibition demonstrates that Canadian-Dutch friendship, forged in fire, is still very much alive today.

DUE TO MUSEUM CLOSURE DURING THE COVID-19 PANDEMIC, WE HAVE REPRODUCED MAPLE LEAVES AND TULIPS AS AN ONLINE EXPOSITION. PLEASE USE THE INTERACTIVE WINDOW BELOW TO DISCOVER THE EXHIBIT (USE FULL SCREEN FOR BEST EXPERIENCE).

You can find here the final colouring by chidren.

The Juno Beach Centre, the Canadian museum on the D-Day landing beaches, commemorates the role played by the Canadians during the Second World War on all fronts, including the campaign of Northeast Europe and the liberation of the Netherlands. At the same time, by showcasing Canada today, the Centre allows visitors the learn more about Canadian values and culture.

Liberation Route Europe connects the main European regions along the Allied Forces’ advance in 1944-1945, and presents the multiple historical perspectives to enhance the accessibility and the visitors’ experience and connects them with the challenges faced in Europe today. www.liberationroute.com.

Exhibition in French, English and Dutch – February to December 2020 – Lobby of the museum – Free entry.