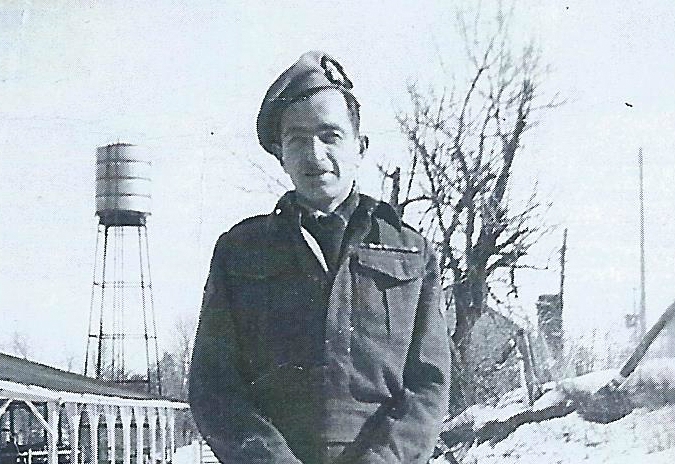 On behalf of the Jamieson family, below is a biography of Private Ray Jamieson, Stormont, Dundas & Glengarry Highlander (1941-1946) D-Day Veteran, Caen, France. His biography outlines when and where he was born, where he studied, how he joined the army, where he fought, and his accomplishments after the war. Photographs of Ray as a young man in uniform and later on in life have also been incorporated into the narrative. The Jamieson family sincerely hopes that this type of information will be a beneficial resource for the Juno Beach Centre’s educational programs or for World War II researchers, and may one day be used in a temporary exhibit. Thank you for preserving the memory of the brave men who landed on Juno Beach 71 years ago and who valiantly fought for our freedom.

On April 19, 1918, Ray Jamieson was born in the rural community of Hillier, Ontario, located in Prince Edward County (approximately 209 kilometers east of Toronto, Ontario, Canada). Ray’s parents were descendants of Scottish immigrants. He was the youngest of five children with two older sisters and two older brothers. Ray’s mother passed away on February 25, 1920 after contracting the Spanish flu. At that time, Ray was only two years old. On August 6, 1920, Ray’s father surrendered custody of Ray and his siblings to an orphanage because he believed he could no longer adequately care for them. The orphanage was located in the nearby Town of Picton, Ontario. Together, Ray and his siblings lived in the orphanage for approximately one year. Shortly after his father remarried on July 5, 1921, he regained custody of his children from the orphanage. Ray grew up on the family farm and attended Hillier Public School until his graduation from Grade 8 at 15 years of age. When Ray turned 16, he left the family farm to set out on his own.
From 1937 to 1940, Ray’s main occupation was a truck driver, but he performed various other jobs in construction, farming, mechanics, and as a general labourer. Before joining the army, he worked for a construction company in Valley Field, Quebec. At that time, Ray’s average weekly wage was approximately $18.00 per week. In 1941, he completed his Grade 9 high school education.

While Ray was stationed in England, he met his future wife, Kathleen Pringle. Family stories reveal that they had met at a dance. Kathleen was no stranger to the war. She had endured rationing, sought shelter during the German Air Raids, witnessed the devastation of the London Blitz and lost her first husband to the war effort.
Kathleen was previously married to Reginald Pringle, who was a British Royal Navy Able Seaman and Defensively Equipped Merchant Ship (DEMS) Gunner. Reginald was en route from Halifax to Liverpool carrying a cargo of wheat from Canada aboard the “Darlington Court” merchant ship when it was torpedoed by a German U-556 Boat and sunk off the North Atlantic Coast. Sadly, Kathleen received a letter from the Royal Navy, Chatham which informed her that Reginald was presumed dead on May 20, 1941. Reginald never knew that he had a son, who was born on September 21, 1940.
The military granted Ray permission on April 18, 1942 to briefly take time off to marry Kathleen in Bognor Regis, England. On May 25, 1943, they welcomed the birth of their first daughter. From November 26, 1942 to June 14, 1943, Ray achieved and worked at the rank of Lance Corporal. However, at his own request on June 21, 1943, Ray reverted back to the rank of Private at a pay draw of $1.50.
From January 5, 1944 to February 10, 1944, Ray remained in England as a Private and continued training in water purifying duties with the Stormont, Dundas & Glengarry Highlanders’ 5CIRV (Canadian Re-Enforcement Unit).

On June 4, 1944, Ray embarked from England with his unit of the 3rd Canadian Division, the Stormont, Dundas & Glengarry Highlanders. On June 6, 1944, Ray and the Stormont, Dundas & Glengarry Highlanders disembarked at Bernières-sur-Mer as part of the D-Day Operation and proceeded to Caen, France. Regrettably, very little is known about Ray’s experiences on D-Day and Caen. The only information that was available is what is written in history books. As well, Ray never discussed the war with his family. Years later, his wife Kathleen recalled a tragic story which depicts the type of atrocities that many D-Day veterans experienced.

It was not common knowledge among the family that Ray had enlisted and joined the Stormont, Dundas & Glengarry Highlanders with his best friend. Together, they travelled to England and trained in the same unit. During the Juno Beach invasion, Ray’s best friend was mortally wounded. In a desperate attempt to rescue his friend, Ray tried to pick him up and carry him to safety. At the time, Ray was unaware that he was carrying only the upper torso of his best friend. It is understandable why Ray did not want to relive these memories, and this experience. The war had a lasting impact on him for the rest of his life. To this day, the family does not know the name of this brave soldier who was Ray’s friend.

On April 11, 1945, Kathleen and her two small children arrived at Pier 21 in Halifax, Nova Scotia, Canada aboard the Brittanic II. Ray was still overseas with the Stormont, Dundas & Glengarry Highlanders. For a brief period of time, Kathleen and her children lived with Ray’s brother and wife near Belleville, Ontario, Canada.
Like many war brides, Kathleen left behind her family and had to adapt to a new culture and way of life in a new country. Ray remained in England with the Canadian Infantry Re-Enforcement Unit until April 30, 1945.
On May 13, 1945, Ray returned from the war to Halifax Harbour in Nova Scotia, Canada aboard the Athlone Castle. In total, Ray served 68 months with 47 months of service overseas in the United Kingdom and North West Europe. His final year of service involved general duties and caretaker of the armouries in Cornwall, Ontario. At the age of 28 years, Ray was officially discharged from the Canadian Armed Forces by reason “to return to civil life” on September 17, 1946. Ray received a Defence Medal, Canadian Volunteer Service Medal and Clasp, War Medal 1939-1945, and France and Germany Star.

In August 1954, Ray became employed full-time with the Northern Electric Company in Belleville, Ontario, Canada. The Northern Electric Company manufactured parts for Bell Telephone. Ray worked in the Paint Department and Gold Department. He eventually progressed to wiring circuit boards by hand with speed and efficiency. Ray won several awards for his proficiencies in this field of work, and had a lifetime membership with the Telephone Pioneers of America.

In 1957, Ray and Kathleen purchased a 54 acre farm for approximately $13,000 with assistance from the Canadian Department of Veteran Affairs (DVA). The DVA established a program whereby veterans could purchase farmland for $1.00 per acre. The farm was located on Rednersville Road near the City of Belleville. Finally, Kathleen and Ray had a permanent home to raise their seven children. Commonly referred to as a “hobby farm”, they grew mainly vegetables and apples. In addition, Ray raised ponies, horses, cows, and chickens. He had a special fondness for dogs.

After 25 years and 9 months, Ray retired from Northern Telecom (formerly named Northern Electric Company) on April 21, 1980. In his spare time, Ray loved to fish. He was a member of the Royal Canadian Legion and would march with other veterans at Remembrance Day services in Belleville.

Ray Jamieson, at the age of 65 – Marching with the Royal Canadian Legion in Belleville, Ontario on November 11, 1983.

In addition to their seven children, Ray and Kathleen Jamieson had ten grandchildren, and seven great grand children.

In June 2015, Kristine Preston, Ray Jamieson’s grand-daughter, came from Orillia, Ontario, with her hsband, to visit the Juno Beach Centre and share her grand-father’s history. This was the opportunity for her to discover the Commemorative Brick offered by Janet andTom MacDonald, Belleville, Ontario, in 2001.

From Juno to Victory: Messages to the Dutch from Canadian Veterans