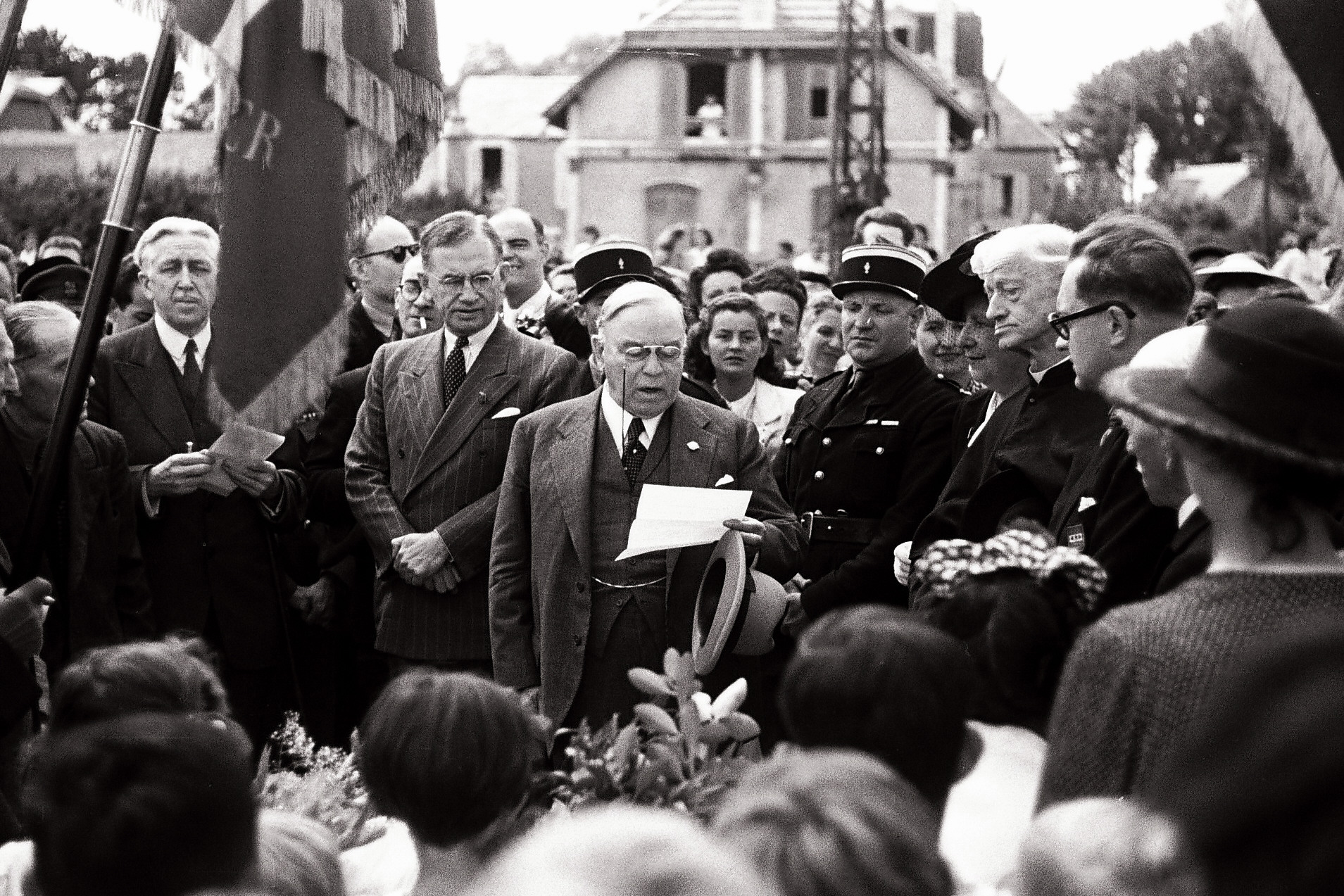 Seventy years ago the world leaders met in Paris at the Peace Conference to determine the future of international politics for decades to come. William Lyon Mackenzie King, the Canadian Prime Minister, was in Paris for the occasion and took the opportunity to visit the Normandy battlefields in August of 1946.

The local press reported dutifully on the official visit, and the Prime Minister recounted his personal impressions and feelings about the journey in his private journal. He was accompanied by Stacey, the official historian for the Canadian Army, who explained the details of the battles and talked about war correspondents such as Ross Munro, Matthew Halton and Marcel Ouimet.

On August 11th, 1946, the Prime Minister visited Caen and the surrounding area.

“[…] we left the hotel at Caen to visit the beaches and the communities en route. A guard of honour was drawn up in front of the hotel. Numerous people were gathered on opposite sides of the entrance and cheered when we started off. Our first stop on the way was at a point overlooking the city of Caen which general Crerar used as his observation point. […] From Crerar’s observation point, one saw what a vast area our men had fought over and how exposed they were to dangers while they sought to relieve the city of Caen.” [2]

When the delegation arrived at 10am in Saint-Aubin-sur-Mer the Prime Minister was amazed by the size and enthusiasm of the crowd, headed by the Mayor and members of the clergy, which had come out to greet him. He then witnessed the unveiling of a plaque.

At Bernières-sur-Mer another crowd greeted the Prime Minister and his delegation. The Mayor of Bernières, Mr. Achille Min, gave a speech which was followed by another speech by Jacques Henry, the president of the newly formed Normandy-Canada Association. The Prime Minister commented on the amount of enthusiasm that was linked to the fact that the town had been liberated by Francophone soldiers, the Régiment de la Chaudière. He then visited the house from which the first messages were broadcasted by journalists on D-Day.

Further down the coast, the delegation stopped at a seaside resort where people were bathing in the sea and playing on the beaches. The Prime Minister climbed aboard an old and rusted vessel left sitting on the beach. It was the remnants of a landing craft which had been used by soldiers on D-Day. There were no special encounters at this stop; however it is believed to have taken place in Courseulles-sur-Mer as the photo below was found in the municipal archives.

At the Bény-sur-Mer cemetery, a ceremony was organized with the Mayor and a priest. “There were many touching scenes at this service. Choirs of little boys who sang God Save The King in English, many of whom were orphans. One little fellow lost both his father and mother and one of his arms. The priest who had the mission teaching them had himself been in a German concentration camp for nearly 3 years. I was tremendously interested in seeing how all the people sang La Marseillaise.”[3]

The next step of the visit was Arromanches. Mackenzie King wrote: “I did not realize until yesterday that our troops had to land on shores, to clear the beaches and make it possible to have ships sunk which constituted a harbour for the landing craft and the landing of large numbers, etc.”  [4]

At the beginning of the afternoon in Bayeux, a reception awaited the Prime Minister at the City Hall. Along with some journalists, the Mayor had invited four nurses from the Canadian Red Cross, who distributed clothing in the area. The Mayor then offered a porcelain Bayeux Tea Service to the Prime Minister. After the reception they visited the Bayeux Tapestry.

“We then visited the graves of our Canadian men and places wreaths of flowers upon them. I confess it seems to me one of the saddest moments I have known. Our young men from the Winnipeg Rifles in most part had been murdered there. What a terrible thing! How appalling the cruelty of war!”[5]

Back once more to Caen, the delegation visited the Abbeys which were constructed during William the Conqueror’s reign.

“One gets a new vision of war as one visits these older countries and realizes how it seemed to be an inevitable part of the life of nations. We have witnessed what is worse than anything the world has known and it is strange to think that oneself has been a participant in it all. There is certainly a destiny that shapes our ends, otherwise how could anyone have ever believed that I would be spending a day such as today among other places at the birthplaces of William the Conqueror.”[6]

“I began to feel how, in the end, despite all else, my own endeavours in the war were receiving some of the reward which they perhaps merited because of the single-mindedness of my effort through that appalling period of time and the terrible responsibility of having had to bring a nation into war and to guide its course throughout.”[7]

Back in Paris, Mackenzie King wrote: “The experience of the last two days has been as great as any I have known in the course of my life. Deeply moving and very solemn experience from active direct contact with life and death and all that they speak of human relations on this globe.”[8]

From the 17th to the 19th of August, the Prime Minister was in Dieppe to participate in the unveiling of a monument dedicated to Canadians.

Of the Sufferings of War

By his own hand, the Prime Minister recounts: “The drive to Caen gave an interesting glimpse of the Bois and Country from thereon and the entry into Caen itself gave one very vivid impression of what the people of that old and beautiful city had suffered.”[9]

Of the Gratitude of the French People

“What is outstanding in my mind as I write, above all else, is the spontaneous, very sincere and hearty welcome given by the people everywhere. Addresses of welcome by the Mayors – all speaking in terms of profound gratitude to Canada for the liberation. The children came forward with many bouquets of beautiful flowers – women as well as men on hearing “Vive le Canada”. […] While going trough the streets, crowds were loud in their acclaim of Canada.”[10]

Of the ties of friendship between France and Canada

“During the day, I referred repeatedly to the historic associations of Canada and Normandy; farmers leaving and settling parts of Canada and laying foundations of a country there. The descendants returning after the years to help to liberate those who were of the same stock. Spoke of the friendship between French and English. It is really deeply moving to think of this historic association.”[11]

Who Are You Running For in Our Remembrance Day Races?